Special Delivery: A Bird in the Hand

SPECIAL DELIVERY is a simple story about the delights of trying something unexpected. When a heavily laden postman is suddenly surprised by a rain shower he discovers that all his packages have lost their labels. in the process of trying to work out the intended recipients, he discovers a bit more about the people on his rounds – and decides to bring a little sunshine into all of their lives.

SPECIAL DELIVERY is a highly flexible show and appeals to both adults and children. It has no spoken language and is performed to a soundtrack of silent film music, operated from the actor’s bicycle.

A Bird in the Hand is a new company, incorporating the talents of artist Alison Duddle and puppeteer Mark Whitaker. Alison is the former Artistic Director of Horse + Bamboo Theatre, designer and director of numerous shows for families including Red Riding Hood, Hansel and Gretel and Little Leap Forward. Mark is a puppeteer and puppetry director, whose work incorporates theatre shows for Horse + Bamboo and Norwich Puppet Theatre, as well as puppetry for Ridley Scott’s Prometheus and the Argos Aliens. 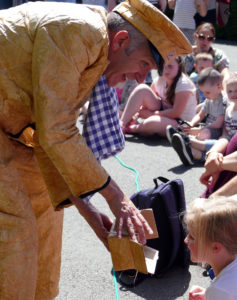 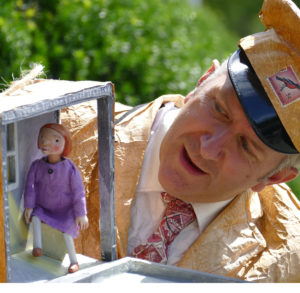 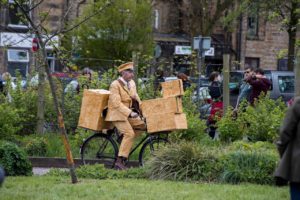